HomeAccessoriesATV Tracks: Answering All Your Questions 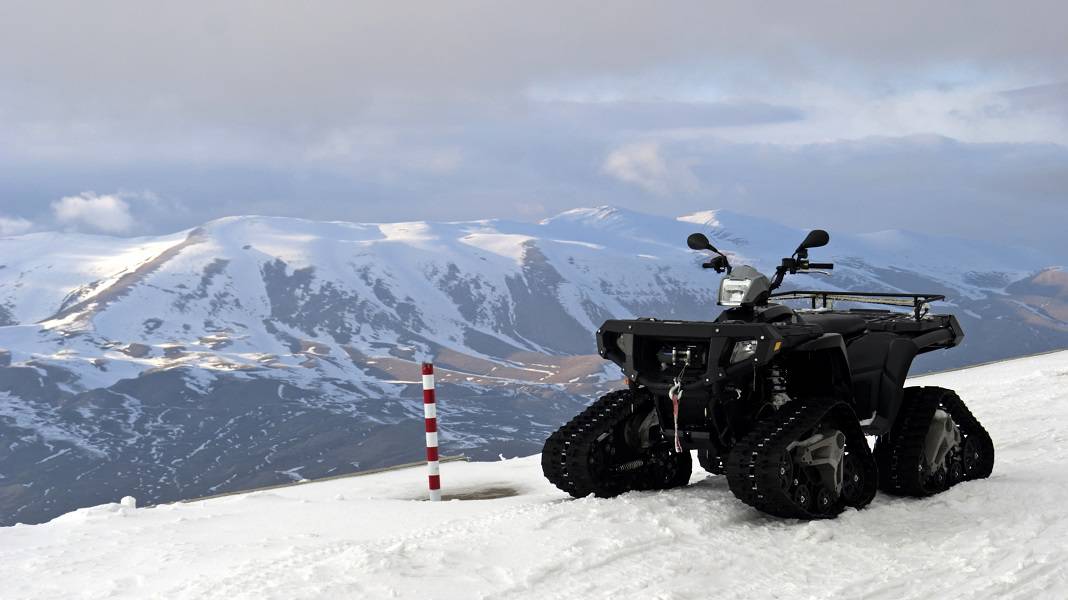 ATV Tracks: Answering All Your Questions

How much do ATV tracks cost?

A lot! Tracks are a major financial investment.

On the lower end are retailers who specialize in ATV tracks, on the higher end are ATV manufacturers with tracks designed specifically for their vehicles.

Will tracks make my ATV less stable and more likely to tip?

Tracks do increase ground clearance by a few inches, 4” – 7” inches on average, depending on model, but this does not lead to increased instability.

A higher profile would usually make an ATV less stable, but tracks have increased weight at ground level and a wider footprint, so this actually helps improve stability.

Are tracks hard to install?

Once the installation kit is installed, it’s about as easy as changing tires. Of course, some models are easier than others, so it depends a bit on your ATV. (And also how good you are at changing tires)

The initial installation kit takes approximately 2 hours to install, after that it should take about 1 hour to install/remove all tracks.

How long do tracks last?

This is a hard question to answer. Much like: How long will tires last?

The best answer is a long time. Several years and/or several thousand miles.

Some factors that will influence how long your tracks last include: vehicle weight, how fast you ride, how aggressively you ride and what types of surfaces you ride.

Riding only on snow, keeping them clean and storing them dry will increase their lifespan.

Can ATV tracks be used in mud, sand and over rocks?

Most tracks perform exceptionally well in mud, sand and rocks. The tracks distribute the weight evenly which provides excellent flotation to keep the ATV from sinking in snow, mud, sand and boggy conditions.

But this performance comes at a price. That price is a shorter life span for your tracks.

You’ll often see tracks being marketed as this ideal all terrain solution, but tracks are best suited for snow. Yes, they can be used on all surfaces, but mud, grit and sand will wear them down faster.

Of course, this is true with tires too. Harsh driving conditions are always harder on gear. Traveling over exposed rocks will wear down your tires faster than a smooth hard packed dirt surface.

Although most tracks are designed and advertised as being for use in snow + other surfaces, there are “snow only” designed tracks.

One notable example is the Can Am Apache Backcountry LT designed for the Maverick X3 and Defender. These tracks are specifically for winter snow performance and travel only.

But Can Am does make year round tracks as well – the Apache 360 LT track kit for all terrain.

Should I buy an ATV or a snowmobile? ATV With Tracks vs Snowmobile

You’ll get more use out of an ATV than you would out of a snowmobile. Even without tracks!

For snow travel only, a snowmobile is a hands down winner. It’s built with 100% snow travel in mind. The body is built enclosed, so snow doesn’t clump up in the open spaces.

Snowmobiles will also always beat ATVs with tracks when it comes to speed and maneuverability in the snow. They’re just overall better for snow play.

But ATVs are a clear cut winner in virtually every other way.

ATVs allow you to hit the trails all year long – a snowmobile simply can’t match that.

ATVs also beat snowmobiles when it comes to practical work use.

Snowmobiles can be used on the snow with plows, trailers, snow trail grooming equipment and other accessories, but overall ATV are a more practical work vehicle. Especially if you have a lot of land, a ranch or homestead.

If I buy a new ATV, will my tracks work on my new machine?

In most instances the tracks are interchangeable for vehicles, but you will need a new installation kit/transfer kit if you change ATV models.

The main reason they would potentially not work on a new ATV is if the vehicle is a big jump up or down in size.

Overall it’s about the same as with tires.

Some exceptions are when traveling very slow, in deep wet snow or deep mud. You will get excellent traction with the tracks in these conditions, but lose a bit of agility and maneuverability.

Your turn radius will also increase with tracks vs tires, so again, a slight loss of overall maneuverability.

Will my ATV go slower with tracks?

Yes, on average expect about a 30% – 50% reduction in your top speed due to gear reduction.

Does it take a lot of power to use tracks?

No, tracks are designed to have a lower power requirement than tires.

The drive sprockets in an ATV track system are sized to match your ATV engine size.

The undercarriage drive sprocket is about 1/3 smaller than an ATV tire. This gears down the power to a drive ratio that delivers more power to the tracks.

How much do ATV tracks weigh?

On average, a track system weighs between 60 lbs – 150 lbs. This includes 4 tracks and mounting.

ATV tracks have more ground contact surface area than tires. In simple terms this means that tracks are longer and wider than tires, so more of the surface area of the track is in contact with the ground.

ATV tracks have a lower PSI than tires. Again, bigger ground contact area means that overall weight is better dispersed. This means that an ATV on tracks will “float” or move better over wet/muddy/boggy surfaces without sinking.

But, there are limits to flotation. In deep mud (think 1 foot +), tires will out perform tracks. Even with excellent flotation, the combined weight of the machine plus the rider can cause the machine to submerge in the mud and get bogged down.

Camso, one of the best known ATV track manufacturers state that ground pressure is reduced on average by 75% using their tracks vs tires.

Just like when you buy a brand new ATV, tracks also require a short break in period.

A typical break in period is 4 hours or 50 miles of driving.

Are ATV tracks worth the money?

For me and my use, no, I don’t think they’re worth the money.

You may live in a different region, have different needs, so you’re opinion may be different. That’s OK. It’s a personal choice.

Don’t misunderstand me, I love tracks and think they’re awesome. But unfortunately, I don’t have unlimited income and tend to look at things somewhat clinically: cost vs function vs fun.

Basically, what’s going to get me the most bang for my buck.

If you have lots of disposable income, then yeah, tracks are a super badass upgrade. They look fierce, they perform well, they’re fun and they extend the riding season.

But they’re very expensive! For the same amount of money or a couple thousand more you could buy a good used snowmobile.

No matter what kind of tracks you put on your ATV, an ATV isn’t built for speed through deep snow. An ATV will never beat a snowmobile for winter fun.

Tracks could potentially be a good investment if you live somewhere where the winters are hit or miss. If some years you get a lot of snow and other years not so much, then a snowmobile might not make sense.

I live in the mountain west where we either get a lot of snow or a ton of snow.

Another area that ATV tracks would be a solid investment is if you use your ATV in the winter for work. If you’re hauling a trailer, moving lumber, towing fishing shacks or doing backcountry work, then tracks make sense.

If you’re just looking for winter adventure, you can’t beat a snowmobile, they’re designed to fly through the snow at top notch speed.

This is a user manual with specs and additional information that you may find helpful:

The Best ATV Trails In Minnesota

5 Great Places To ATV On The Beach