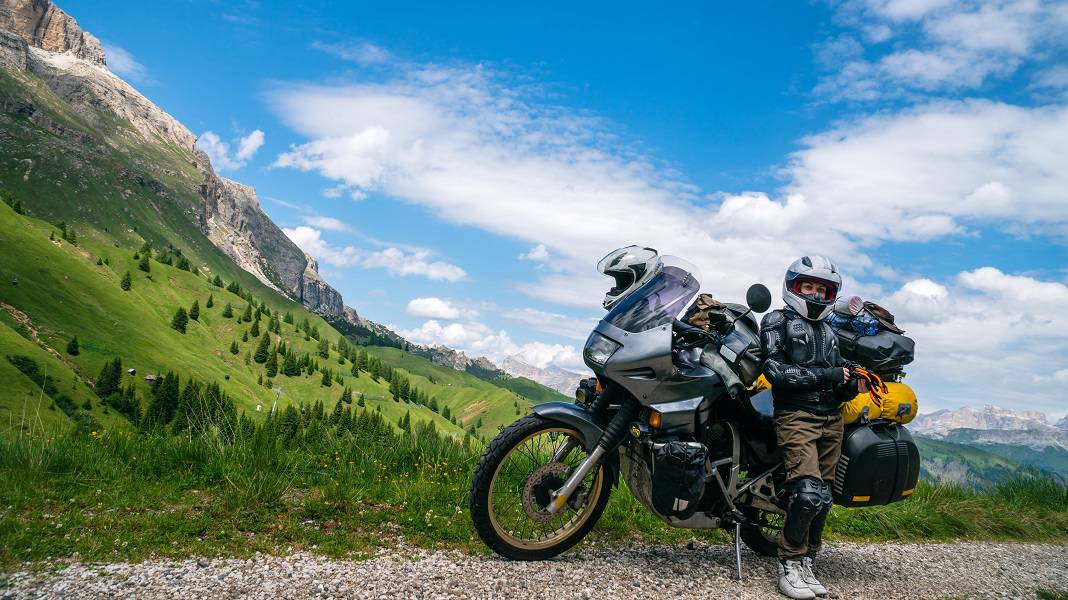 This amazing off road route will take you from Nags Head, North Carolina to Port Orford Oregon with some additional trail spurs available for extra riding.

This trail is comprised primarily of forest roads and back country dirt roads with some minimal travel on pavement and can be done with a street legal dual-sport motorcycle or any street legal 4×4. (This route is also popular with the mountain biking community.)

With almost 5,000 miles of varied riding terrain available, this trip is physically demanding. However, it’s very easy to plan as all the hard planning has already been done. There are detailed maps, roll charts and GPS files available that tell you everything you need to know – trails, motels and gas.

The Transamerica Trail is set up for East to West travel with all the maps and GPS co-ordinates set up for a western journey. An average full days ride is 11 hours and covers 200 miles.

One great feature of this trail is that each days ride is designed to end in an area with a motel/hotel. Of course, you can camp as well, but who doesn’t love a hot shower and a soft bed after a hard days ride?

The Transamerica Trail serves up a variety of terrain including dirt roads, mountain passes, pavement, sand and water crossings. Some minimal travel on pavement is required, so all motorcycles and vehicles must be street legal.

To avoid snow and dangerous mountain conditions, the best time to ride is late June to early September.

This long distance OHV riding trail was established in the 1980s by Sam Correro, an avid motorcycle rider looking to satisfy his own desires to ride coast to coast entirely off-pavement.

Unfortunately, it’s not possible to ride entirely off pavement, but this trail utilizes back roads as much as possible and offers up a big adventure.

The Continental Divide ride should be on every rider’s bucket list. This epic ride with breathtaking views will take you 2,767 glorious miles from Canada to Mexico through some of the most beautiful and rugged mountains in the United States.

Comprised primarily of small backcountry dirt and gravel roads which takes you through the backcountry of New Mexico, Colorado, Wyoming, Idaho and Montana. You can pick up this dual sport trail at the US/Canada border and just ride the US portion, or you can choose to travel the entire trail which actually goes through two Canadian provinces and begins at Banff National Park.

Most riders take about two weeks to complete this trip, but you may want to add an extra week for additional riding and sightseeing. You’ll pass through Grand Teton National Park on this ride, but Yellowstone and Glacier National Parks are a short drive away and well worth the extra time.

This trail has a very short window for travel – end of July through September. A late summer start helps ensure the high mountain passes are passable with a minimum of snow.

The downside of traveling through the mountains during the late summer is the daily likelihood of afternoon rain storms. These storms can be dangerous at high elevations and leave mud and potentially dangerous riding conditions in their wake.

If you’re unfamiliar with mountain travel, the weather can change on a dime. Not only are afternoon rain showers likely, it can also snow any time of year. That includes July and August! Hope for great riding weather, but plan for potentially freezing temperatures.

With minimal planning, you can have the option of staying in a motel every night and daily restaurant meals. Of course, camping is readily available and can help keep expenses down. Even when planning on motel stays and restaurant dining, carrying emergency camping gear and extra food is always a good idea.

This is a tough ride only recommended for advanced riders. Travel with a partner or a small group and plan for flats, equipment failure and bad weather.

A dual sport bike is the recommended ride for the narrow mountain trails.

The original Continental Divide Trail was strictly for hikers, but eventually mountain bikers wanted in on the action, so they established a parallel bike route. Once these other routes started gaining in popularity, motorcyclists worked to established this motorized route.

If riding several thousand miles across the United States isn’t hard core enough, kick it up a notch with a 9,000+ mile ride across Canada. This trail will take you through the provinces of Newfoundland, Labrador, Quebec, Ontario, Manitoba, Saskatchewan, Alberta and British Columbia.

For this route, you need a dual sport, but you won’t need super aggressive tires. The route is primarily on well maintained dirt/gravel roads. This route offers the most miles, but it is easier than both the TAT and the Great Continental Divide Adventure Route.

Most riders take 7-10 weeks to complete the ride. As with the Transamerica Trail, it’s recommended that you ride from East to West starting in early June. This is because the mountain passes in BC and Alberta may not be clear of snow until early July. The window for crossing Canada is a brief 4 months with snow and freezing temperatures possible even during the summer.

For the most part, services are readily available on this trail, it’s quite easy to get food and gas and stay in a motel almost every night. However, this doesn’t mean this ride is easy, it’s anything but.

It’s recommended that you travel with a partner and plan for bad weather, exhaustion and breakdowns – all of which are an inevitable part of a journey of this magnitude. You need to pack emergency equipment including camping gear for the 1 or 2 nights that you might not be able to make it to a town.

The dream for this trail was hatched in 2007 and was a massive undertaking. It quickly turned into a group project with several people along the way contributing their local knowledge to make this dream a reality.

This off road adventure will take you from sea to shining sea where you will see all that Canada has to offer including islands, swamps, prairies and mountains. You may even have the opportunity to see some big game like elk, moose and bears.