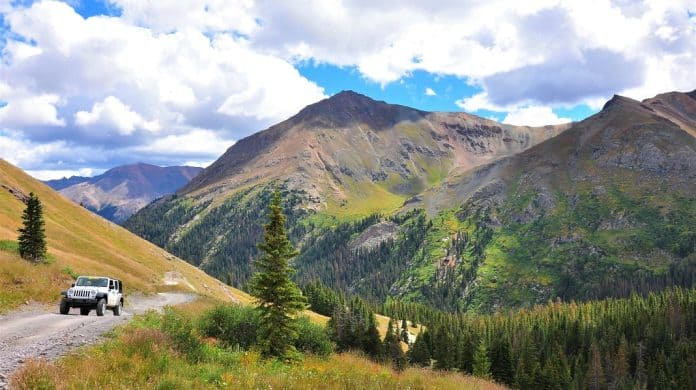 When you purchase through links on our site, we may earn an affiliate commission. As an Amazon Associate I earn from qualifying purchases.

The first town of Carson was built high up on the Continental Divide, this first Carson is now referred to as Old Carson. Located above the tree line, at over 12,000′, this first town had harsh unforgiving weather. So, over time, the town migrated down to it’s current location below the tree line.

Even though this new location at 11,600′ made living a bit easier, it was still a hard scrabble place to live.

The towns namesake, John Christopher Carson, spent some time in the late 1800s traveling around Colorado looking for promising claims. When he first passed through the region in 1876, he found some promising samples, but decided to keep looking elsewhere.

He did however return in 1881 to make several claims including what became the Bonanza King Mine.

Once a miner stakes a claim, others are sure to follow and Carson was no exception. Once the word got out, a slow trickle of other miners made their way to (Old) Carson mining camp.

During the early years from 1881-1896, typically only a couple dozen people lived here on a regular basis. But, at times, the population could reach up to 50 people on a good day.

In 1881, the US experienced the Panic of 1893, driven by the collapse of two of the country’s largest employers, the Philadelphia and Reading Railroad and the National Cordage Company. Although this time is not as well known as the Great Depression, it was a period of extreme economic uncertainty and instability in the stock market.

With the Panic occurring at the start of the town’s history, it put a damper on the town’s growth. I’m sure the high risk/high reward speculative nature of mining also became less attractive during these turbulent times.

However, the towns fortunes changed in 1896 when rich gold deposits were discovered in Channing Frank Meek’s George III and Bachelor mines.

After the gold discovery, the towns population jumped to 400+. But, like most mining towns of its time, it from boom to bust in less than 5 years.

The main driving force behind the town’s collapse seems tied to when the largest mine operator, Colonel C. F. Meek, sold out to pursue other opportunities. Labor concerns and a lack of working capital are both thought to have played a part in the towns demise. No doubt the remote location and harsh, inhospitable weather didn’t help.

Lake City To Carson Via The Alpine Loop

Carson Ghost Town is located on a spur trail off the Alpine Loop. Keep an eye out for the Wagner Gulch Road/Carson Townsite sign on your left.

From Lake City to Carson is approximately 16 miles. Most of the trail is easy going with travel on a hard pack dirt road suitable for 2 wheel drive vehicles.

But, once you turn off the main Alpine Loop road and head south to Carson, the trail takes a turn for the worse. The first mile or so is very rough going, but it does get a bit easier at about the halfway mark.

It’s bumpy! The road is a combination of hard pack, gravel and embedded rocks. It’s not technical, just spine jarring. Depending on the season/weather, there may also be some water crossings up to a foot deep.

From the junction to Carson Colorado is 4 miles and the road ends about a mile past the ghost town. However, if you have an ATV <50″ you can continue on Lost Creek Trail #821.

Lost Creek Trail 821 ends/starts at Lost Trail Campground, a free remote campground that get light usage. There’s no potable water, but there is a vault toilet.

Some Of The Best Hiking In Colorado

The Colorado Trail is one of the most beautiful hiking trails in Colorado. This narrow 485 mile trail connects Denver to Durango. For clarity and mapping, the trail is divided into 33 segments. It’s open to hiking, horseback, and bicycling.

Backcountry on the Alpine Loop by Larry Lamsa | Flickr

ATV Nerf Bars: Everything You Need To Know

What To Wear ATV Trail Riding