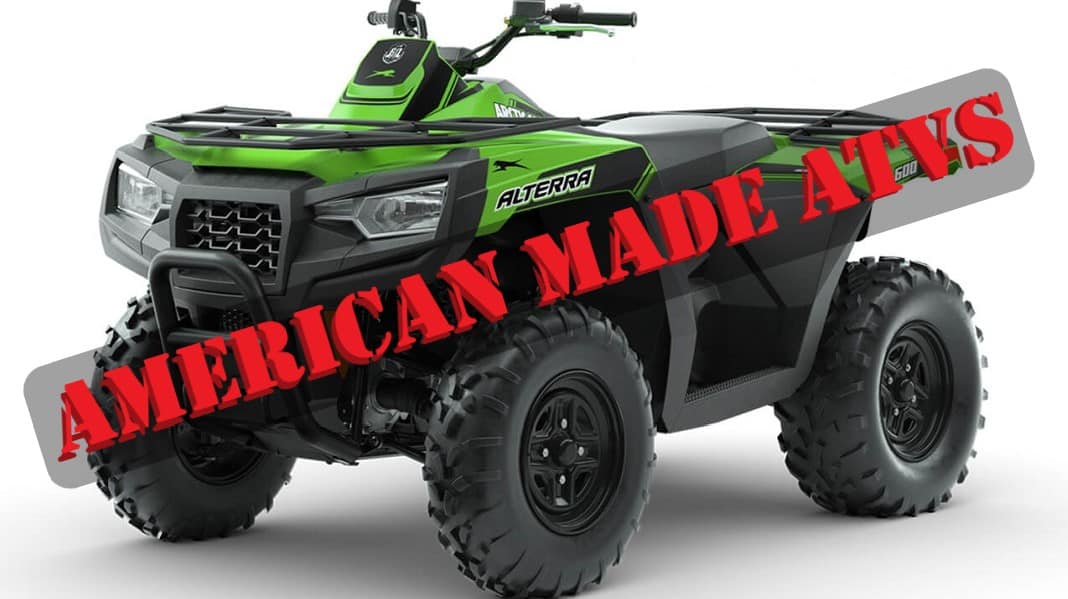 What Qualifies As American Made?

The computer chip market is largely dominated by SE Asia. And while engines are built or manufactured in the US, some engine components, nuts, bolts and other “odds and ends” may come from China or other countries.

Obviously, US based manufacturers are proud of producing American made ATVs.

We agree this is a huge selling point (and one that should rightly be celebrated!).

But, this also means that companies don’t want to state exactly what parts are sourced/made in China or outside the US.

You’re probably never going to hear a company say “We make our ATVs in the US, except for 20 screws, 2 dashboard lights, a wiring harness and a bracket that we got from China.”

So, we’re willing to say that ATVs and SxS that have US based manufacturing, a large US presence as well as most of their components made and/or assembled in the US qualify as American made ATVs.

What ATVs are made in the USA?

….But Arctic Cat & Polaris Were Born And Raised In The US And Have Company Headquarters In The US

Interestingly, Arctic Cat and Polaris have a founder in common and roots firmly planted in Minnesota. (not too surprising I guess when they have the same founder)

Today these two companies still maintain a strong presence in the state.

Both Arctic Cat and Polaris also started with snowmobiles prior to eventually expanding into the ATV/SxS market.

2 US Manufacturing Facilities / N/A US Based Corporate/Distribution/etc.

In addition to it’s corporate headquarters, Arctic Cat also still does most of it’s manufacturing in Thief River Falls MN.

Other US Based Facilities

This information is not provided by the company.

Textron employs 35,000 people in more than 25 countries with its world headquarters located in Providence, Rhode Island.

But, Arctic Cat is still based in Minnesota.

Unfortunately, in what was viewed by many in the industry as a questionable move, Textron immediately got rid of the Arctic Cat brand and replaced it with the Textron name.

What Was Textron Thinking?

Arctic Cat spent years building its brand while creating a fan base loyal to the Arctic Cat brand and Textron literally erased it overnight.

I don’t have exact figures, but I’m sure this bit of brand hubris cost Textron significant money because they quickly reversed course.

In 2019 the Arctic Cat name was restored.

However, in those two years significant damage was done. The Arctic Cat brand is still in recovery.

Textron has contracts with the US Department of Defense for products and services such as next generation armored combat vehicles, supersonic and subsonic adversary services and commercial tactical airborne training support.

5 US Manufacturing Facilities / 5 US Based Corporate/Distribution/Development/etc.

Other US Based Facilities

Polaris is the largest supplier of specialized OHVs for light tactical mobility to the US Army.

Polaris started in 1954 in Minnesota with a snowmobile pieced together by founders Edgar and Allan Hetteen and David Johnson and it’s been growing stronger every year.

Their jump into the ATV market began in 1985 with the introduction of a 3 wheel ATV, the Polaris Scrambler 250 and a quad, the Polaris Trail Boss.

To this day, they maintain a strong US presence with development, manufacturing and assembly.

Unfortunately it hasn’t been all good news…..

In 2010, Polaris announced that it was moving a portion of its production and assembly of some OHVs and engines from Osceola, Wisconsin to Monterrey Mexico in 2012.

Obviously this announcement was not well received.

Prior to the move, Polaris was the gold standard for American ATVs. But, with the stroke of a pen, 500+ full time US workers lost their jobs.

Of course, Polaris said they could apply for jobs at other locations, but it’s not easy (or always practical) to uproot your life, sell your house and move your kids to a new school.

Polaris did save some Oseola jobs, but they are now only manufacturing powertrains.

Polaris said the move to Mexico was a strategic “realignment”, part of which was to be “closer to customers in the southern United States and global markets”.

Not surprisingly, the move to Mexico saved Polaris a lot of money – $30+ million dollars a year to be exact.

The 2010 press release from Polaris reads in part:

“The realignment is expected to generate pre-tax costs and expense savings in excess of $30 million on an annual basis when the transition has been completed. The Company expects to begin realizing some of the cost savings as early as 2011.”

What Is Polaris Making In Mexico?

Iron clad facts about which vehicles/components are made in Mexico are hard to find.

According to an unsubstantiated citation in Wikipedia and some posting I found in forums, Polaris Mexico is producing RZR, Ranger Crew 900 and mid size ATVs from 325cc – 570cc for global markets.

Vehicles assembled in Mexico will have a “Made in Mexico” sticker somewhere on it. A person in a forum found one on the back of the valve cover, but this could indicate that only the engine was made in Mexico.

In 2015, Polaris announced plans to build a manufacturing and assembly plant in Huntsville Alabama.

This was a major coup for both Huntsville and Alabama as it beat out 14 other states and brought approximately 2,000 jobs to the region.

In Huntsville Alabama, Polaris manufactures and assembles Slingshots and off road vehicles.

Foreign Based Companies With American Made ATVs

900 US Jobs at Honda South Carolina

(ATV/SxS employees only – doesn’t include cars or motorcycles)

American Honda Motor Company (AHM) is a subsidiary of Honda which has their headquarters in Minato, Tokyo, Japan.

But, this Japanese based company has a strong US manufacturing base.

The Talon SxS are made from mostly American parts. Chassis production and vehicle assembly is done at the Timmonsville plant.

However, engines and transmissions are imports from Japan.

(This number includes ALL employees, even those not strictly producing ATVs. A segment breakdown is not available)

With it’s headquarters in Minato City, Tokyo, Japan, this Japanese based company also maintains a strong US manufacturing base.

Kawasaki Plants A Flag In The US Market

Way back in 1974, Kawasaki had vision – they were the first foreign vehicle manufacturer to open a manufacturing plant in the US.

Kawasaki now has two US based manufacturing facilities.

Lincoln Nebraska is the site of their first US manufacturing plant. Located on 335 acres with 1.3 million sq. ft. of manufacturing, office and warehouse space, this is the larger of the two locations.

These products are sold throughout North America and exported to Japan, Europe, Australia, New Zealand and other locations around world.

They also have a rail car production line in Lincoln for train and subways cars. These rail cars are for use in the US.

Both locations also have their own Research and Development Centers.

200 US Jobs in Rome Georgia

(ATV employees only – doesn’t include cars or motorcycles)

Suzuki’s headquarters are based in Hamamatsu, Shizuoka, Japan with it’s US ATV subsidiary doing business as the Suzuki Manufacturing of America Corporation (SMAC).

They maintain a worldwide presence and ship to dealers in almost 60 countries.

They’ve been building Suzuki King Quads in Rome Georgia since 2001.

This includes fabrication as well as assembly.

Originally, engine assembly was done in Japan, but in 2014 they also brought this part of the manufacturing process to Georgia.

King Quads are made in the USA.

Yamaha Headquarters are based in Hamamatsu, Shizuoka, Japan. Its US subsidiary is Suzuki Manufacturing of America Corporation (SMAC).

With a series of steps taken from 2011 – 2013, Yamaha moved it’s ATV production from Japan to Georgia.

This strategic move allowed Yamaha to better serve the US ATV market, the largest in the world, by streamlining supply and distribution chains.

Yamaha Make Several Product Lines In The US

Some (but not all) Yamaha ATVs and SxSs are assembled in Newnan Georgia.

They have an ‘Assembled in the USA’ badge right on the ATV/SxS webpage, so you can easily see which ATVs are made in USA.

Their sport Raptor ATV line all have the ‘Assembled In The US’ badge, except for the children’s model the Raptor 90.

The other children’s ATV, the YFC 50, is not assembled in the USA.

None of the utility ATVs have the ‘Assembled In The US” badge. This lineup includes Grizzly and Kodiak models.

The sport YXZ SxS lineup all have the ‘Assembled In The US’ badge.

But, none of the 10 Wolverine recreation SxSs or the 4 Viking utility vehicles have the badge.

Can Am doesn’t have any American Made ATVs.

CanAm’s US presence is all related to it’s Evinrude outboard engine line.

ATV Trails In Upper Michigan: Yoop It Up [Video]