HomeATVsTake To The Sky In A Skyrunner Flying ATV 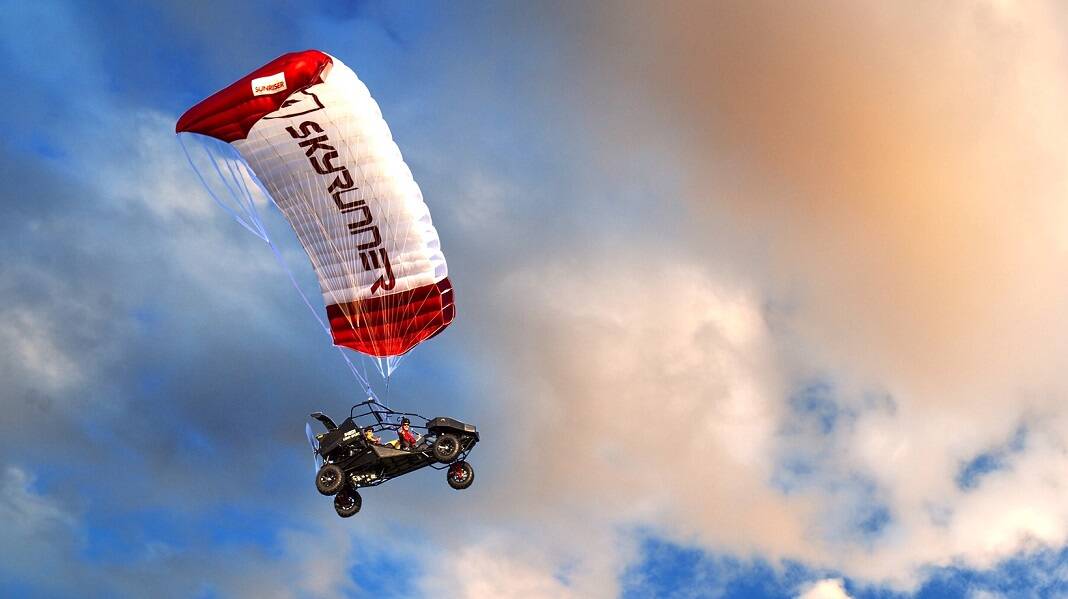 Take To The Sky In A Skyrunner Flying ATV

Remember back in the 1980s when everyone thought that flying cars were the future. We were convinced that in the not so distant future, everyone would have a flying car in their garage.

This was the early days of computers, cell phones and the internet. They hadn’t hit the mainstream yet, but possibility was in the air. These new technologies were emerging so quickly that we figured flying cars weren’t that far off.

Well, the future has arrived, but we’re still waiting on that flying car. But, with the introduction of the Skyrunner, that future may be getting a little closer to becoming a reality.

The Skyrunner is the amazing combination of an ATV with a parasail. It’s not exactly a flying car, but it’s the closest thing we have right now.

This is some next level stuff – part James Bond – part every kid’s dream.

Obviously all this comes with a hefty price tag – currently the Skyrunner costs somewhere in the neighborhood of $139,000.

You may be tempted to think this is a “gimmick” vehicle, like maybe they just stuck a parasail on an ATV and called it good. But nothing could be further from the truth.

This vehicle has real off road cred. It features a Polaris Prostar 1000 for land travel; you’ll have 89 hp and be able to reach a top land speed of 70 mph.

Since the Skyrunner is classified as a ‘light sport aircraft’, you do need to get a sport pilot license.

This ‘Light Sport Aircraft’ category was introduced in 2004 by the FAA as was the Sport Pilot License (SPL) required to fly light sport aircraft.

Getting this license is a quick process, you can be up and flying in two weeks or less. It costs $15,000 for new pilots and $9,500 for certified pilots.

Restrictions such as flying only in the daytime, good weather, and uncongested airspace do apply.

What Does The Future Hold?

While I’m still bitter that I don’t have a flying car by now, the reality is closer than it’s ever been.

The Chinese corporation, Geely, that owns Volvo and Lotus got FAA approval for their Terrafugia Transition to operate in US air space. This two seat vehicle is a real life flying car!

With the push of a button, this vehicle transforms from drive mode to flight mode. The wings fold up tight – no need for a hanger, it fits in a home garage.

Like the Skyrunner, you’ll need a sport pilot license to operate the Terrafugia Transition.

It’s still going to be awhile before every garage has a flying car in it, but the future is here.

ATV Tire Repair: How To Fix A Flat With A Tire Plug