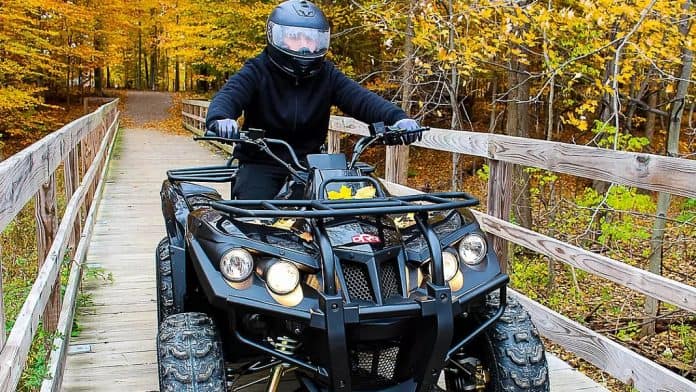 When you purchase through links on our site, we may earn an affiliate commission. As an Amazon Associate I earn from qualifying purchases.

As people  become more concerned with environmental issues, the demand for electric vehicles has increased. Sure, rising gas prices drive some consumers to electric vehicles, but being “green” is probably the biggest motivator.

However, electric vehicles still face some considerable hurdles when it comes to their gas counterparts.

I have no doubt that in time, significant technological will tighten the gap between gas and electric, but as of today, gas vehicles are simply more attractive to the average buyer.

US gas and electric ATV manufacturer based in Brunswick OH.

They’re big supporters of kid ATV and motosports, striving to make these sports as safe as possible.

With it’s two gas powered mini quads for children, they innovated several designs advancements to make the vehicles as safe as possible.

DRR USA has products approved by both the American Motorcycle Association and the Consumer Product Safety Commission (CPSC).

In 2018, they developed and began selling fully electric ATVs.

In 2022, they plan to roll out fully electric UTVs.

Their Mission Statement shows a big commitment to green vehicles:

To develop unique, quality ATVs and UTVs that improve the consumer experience while providing solutions to support a greener earth.

*This model is not made for inclines over 20°

This company is based in England with distributors located primarily in Europe, but they do have one distributor in Pickens, South Carolina.

Read on below to find out more about the Tesla Cyberquad.

The road to green, environmentally friendly ATVs is littered with casualties.

Bad Boy Buggies was hailed as an industry leader back in 2003 when they came out with a fully electric UTV. However, bad design and instability on uneven surfaces resulted in serious leg injuries which  then led to serious lawsuits.

Although some design changes were made, they weren’t adequate and safety questions persisted. Eventually Bad Boy Buggies was sold to Textron in 2010.

Arctic cat used to make two electric vehicles, the Prowler EV and Prowler EV iS, but the last year these vehicles were manufactured seems to be 2019. In 2017, Arctic Cat also became part of Textron.

Currently, it seems that Arctic Cat/Textron are out of the electric ATV/UTV business.

Textron’s prior purchase of Bad Boy Buggies suggests an interest in electric vehicles. I don’t know what the future holds, but I’d be willing to bet that they’ll eventually wade back into the electric vehicle market.

Another casualty of the Electric vehicle wasteland  is Barefoot Motors which opened in 2007 only to close in 2010. Barefoot Motors even had help from Jamie Hyneman of the TV show Mythbusters who helped co-design one of it’s early models. But that still wasn’t enough to save it from an early demise.

So, several electric ATV manufacturers have boldly waded into the market, only to face an untimely early death.

Some of these visionaries were ahead of their time. Or at least a little ahead of consumer demand.

Maybe today, with increase interest and demand in electric vehicles, these same companies could have had a very different outcome.

Late in 2019, Elon Musk had the internet buzzing when he first teased the arrival of the Tesla Cyberquad.

He rolled out an electric ATV as part of a demonstration. The Cyberquad was used as a prop to show the loading capacity of their Cybertruck which is due to start production in late 2022.

The Cyberquad was teased again in September 2020 allowing the public to get a better look.

With a bit of marketing flair used  to drum up interest in the Cybertruck, the ATV is currently only available as an add-on for the Cybertruck.

It’s currently unknown if Tesla intends to make the Cyberquad available for individual purchase, but it would be an exciting and well received entry into the market.

Battery Improvements On the Horizon

At Battery Day held on September 22, 2020 Tesla announced major advancements in battery technology that could increase battery range by 54% and  also ultimately reduce the price per kilowatt hour by 56 %.

According to Elon, these improvements may take up to three years of development before they become a reality.

But, these battery developments represent an amazing jump in capabilities and indicate a bright future ahead for electric ATVs.

Check out the Rich Rebuilds Channel on YouTube. These guys built their own version of the Tesla Cyberquad and topped it out at 102 mph.